This tour gives you the opportunity to connect the cities of Granada, Córdoba  and Sevilla with their world cultural heritages: the marvelous “Alhambra” in Granada, the stunning “Mezquita” in Córdoba, and the romantic Giralda  in Sevilla. Cycling between these incredible cities you will find many small authentic villages to be discovered, with kind people and beautiful landscapes. Betake a journey through time and across unique landscapes and natural reserves that feature along the way.  Ride through  tranquil hills of olive groves, holm-oak woods, vegetable gardens and vineyards, rushing streams, imposing watchtowers, proud castles, impeccable farmhouses and humble farmsteads, all giving the backdrop to an unforgettable visit. Enjoy the villages, castles, churches and towns that stretch before you just waiting to be discovered, such as Moclín, Tózar, Alcalá la Real, Alcaudete,  Baena, Castro del Río,  Écija, …. You will find them the perfect place to relax and recover lost energy with the best food and wines this region has to offer.

Feel the history on every kilometer, and even at night, when you sleep in an old convent or in the former prison! Do not think it twice, just come to cycle the Golden Triangle of Andalusia!

From  Málaga or Granada airport you will take the local comfortable bus to Granada city, where you will stay in a cozy hotel in the historical center of the town. You can stroll around the cathedral and its old silk market, take some drinks and be invited to the rich tapas. Finally, we suggest you experience an authentic flamenco show to get you ready for a journey, which has only just begun. 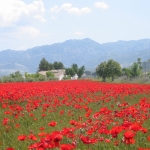 In the morning you can explore the city and the amazing palaces and gardens of the Alhambra. At midday you will be collected at your hotel and will be brought in 45 minutes to the small village of Tózar, from where you will start your bike route first to the neigbour village of Limones. Then you will leave the asphalt and continue on unpaved roads with ups and downs towards Casillas de Gumiel. From here you continue on tarmac roads, the landscape changes and you'll ride between fields of cereal crops which are full of poppies in springtime! You come to Fuente del Rey (The Kings’ fountain), where you can stay in a rural lodge, or 2km further in Alcalá la Real, depending on the availability

Today there is some good up and downs! You leave Alcalá by a trail or by the old tarmac road, you choose what you prefer, to Castillo Locubín. A good downhill brings you to the San Juan river, which you will follow. Although the stage is short you will need your time to come finally to Alcaudete, where you will stay in the hotel just in front of the castle! 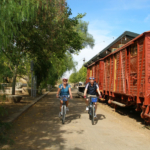 Today you will head down to the old station of Alcaudete, from where you will be riding comfortably flat along the "Vía Verde" (old railway line), coming along the Salt Lake of Salobral (maybe you can see flamingos!). After passing the station of Luque, where you can have lunch in an old wooden train wagon, you continue towards Baena on the green way.  You can have a second breakfast here, the typically one is bread with tomato and olive oil! Then continue on a road in disuse (if you see the wholes you know why…) to Castro del Río, another village famous for its olive oil and the local crafts as furniture made from olive wood, which has been exported as far as Japan. You will sleep in an old convent.

After breakfast, you can either go to Córdoba by taxi (10:00 o’clock) or you can cycle on a road with hardly any traffic but with some climbs (total 530 meters ascend) to come to the Roman bridge of Córdoba and continue to your hotel. Visit the stunning Mosque with a catholic cathedral inside! Enjoy a walk through the old Jewish quarter to see its beautiful patios and have tapas in its inns.

You will cycle out of Cordoba today towards Ecija. First you need some kilometers to head out of Cordoba, then you take the Greenway of the Campiña. Ecija is a beautiful small town, also called as City of Towers. Ecija is declared a historic-artistic site, with courtyards that will leave you amazed, churches, museums and of course its towers, the most beautiful in Andalusia and a symbol of this city's skyline. A city of convents, palace-homes and buildings that without the need to enter them are now enough to be fascinated, being able to perfectly say that Écija is a real open-air museum.

Easy riding on the Green Way to Marchena, surrounded by undulating cereal fields and olive groves. Marchena, a charming village, with the restored gates to the walled enclosure like Puerta de Morón. This gate, comprises one double gate with a patio and an Almohad tower from the first half of the 13th century. It is currently the headquarters of the Municipal Tourist Office and, in the covered patio and on the upper floor, the Lorenzo Coullaut-Valera Museum, named after a renowned sculptor from Marchena at the end of the 19th, beginning of the 20th century. 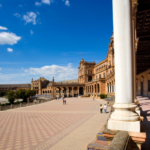 After breakfast fin of the journey, take train to Malaga (2 hours). You can also head to Seville by train in 45 minutes and enjoy the capital of Andalusia!

Transfer to the starting point