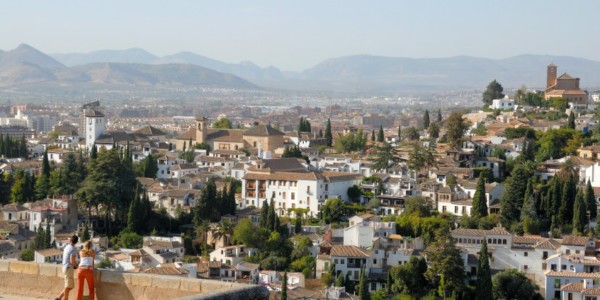 Albayzín is the name given to the lower slopes of San Miguel Hill, inhabited since way back in history, in the northern part of the city of Granada.

The Darro River marks the edge of the neighbourhood on its eastern, lower side, separating it from the neighbouring Sabika Hill, home to the Alhambra. Its north-westerly end is stuck close to Granada’s ancient city wall, at Cuesta de Alhacaba hill, while the natural gully that forms Cuesta de Chapiz hill joins the Albayzín to its neighbouring Sacromonte, famous for its caves and its flamenco. But it is not just a part of Granada. This was the first Granada and continues to form a vital part of the city, the most important witness to its living history. Neither is it just another picturesque neighbourhood to visit; it is a city in itself, and a magical city at that.

The Albayzín looks across to the Alhambra and out over the fertile plain that is home to the low part of the city and its surrounding farmland. It is half human, half divine, a model of co-existence and a reflection of the world’s nature and spirit. Perhaps this is because the Albayzín is a privileged location protected by high peaks and formed by a maze of labyrinthine streets, crammed with white houses, dotted with small squares and decorated by a host of old brick bell-towers. Or perhaps it is the concentration in such a small space of so much arte del vivir (art of living), summed up in the Albayzín’s many cármenes (a combination of house and vegetable garden, evoked in literature as real-life gardens of Babylon), in the harmonious layout of houses built around their respective places of worship, in an abundance of squares (like Plaza Larga, Aliatar and San Miguel), of viewpoints (San Cristóbal, San Nicolás, Cruz de la Rauda…) and peaceful, sensual attractions. All this is combined with an incredible system built to bring water, the city’s precious life-blood, from the limestone mountains of Alfaguara and Huétor along channels like the famous Aynadamar canal, to fill the Albayzín’s 28 public (and many more private) fountains and cisterns.

The Albayzín was always a citadel, home to numerous small neighbourhoods or parishes (twelve in the 16th century – (San José, San Pedro, San Juan de los Reyes, San Miguel…), cultures and beliefs, and continues to be so to this day.

Beauty and new ideas come together with history in the Albayzín, welcoming the traveller. With its remains of the ancient city wall, city gates, squares, ancient palaces, churches, stately houses and humble dwellings, fountains and cisterns, enviable cármens.

The Albayzín residents only head down to the city when they feel like it, because they have everything they could need right there. The sky is closer, the mountains protect them and the rhythms and dance of the Gypsy Sacromonte neighbourhood accompany their daily lives.

When they are sad, or oppressed by worldly problems, they only have to go to one of the countless viewpoints, seasonally perfumed by wisteria, jasmine, limoneros de luna and honeysuckle to recover their calm and their place within this microcosm of the Creation called Albayzín.

The hill that is home to this ancestral neighbourhood, designated UNESCO World Heritage Site, was also the site of the first settlement of what is today Granada, of Iberian origin, dating back to the 7th century BC.

After the Iberians, the Romans arrived, founding Municipium Florentimum Iliberritanum. Nevertheless, it was in the 11th century that the Albayzín hill took on strategic importance as a city, taking on the population that came with being capital of the cora (province) of Medina Elvira.

Up until then it had been located in the Elvira Mountains. Elvira was an open city whose population comprised old Christians (late Romans and Goths) and Muslims from the East. Due to its ill-protected location, it was the victim of constant wars and attacks, so that in 1009-10 the population decided to “move” to the hill-neighbourhood (already inhabited by Yemenis, Syrians and Visigoths) that was much more easily defended.

When the Caliphate came to an end and the “taifas” (small, regional power bases) were installed, the Kingdom of Granada was lead by the Zirids, who made the Albayzín their political, economic, military and religious centre from 1012 onwards. These were the first “Granadinos”: Zawi Ben Zirí, Habus and Badis would settle here, in the so-called Alcazaba Cadima, their fortress, palace and court. Later on a convulsive period characterised by the religious fundamentalism of Almoravids and Almohads would follow.

These were both North African tribes who would take the throne from the Zirids, a transitional period before the arrival of the Nasrid Albayzín. At the beginning of the 13th century, pressure exerted by the advancing Christian armies (which had already taken Jaén province), would provoke a mass-emigration towards Granada, and the Albayzín hill specifically was filled with immigrants from Ãsbeda and Baeza (known as Bayyasines).

This seems to be the origin of the name “Albayzín”. From this very same political and military pressure, and from the disorder that reigned in a retreating al-Andalus, came the great warrior-founder of the Nasrid dynasty: Al Hamar. He settled in the Alcazaba Cadima while work was carried out to rebuild the Alcazaba Nueva (New Fortress) on the other side of the Darro River.

This would be the first phase of the Alhambra. When Boabdil, last of the Nasrid kings, left Granada, the Albayzín had a healthy population of 30,000, experts in all the professions and arts. This was the inimitable expression of a culture that was both an island of beauty and knowledge, and the final chapter in the decline of al Andalus. It must be underlined, furthermore, that without understanding al Andalus, it would be impossible to understand Andalusia and Spain today.

The 16th century would see, first, co-existence of the Muslim population with the conquering Christians, and later a revolt by the oppressed “Moriscos” (forced Muslim-Christian converts). This revolt lead to a decree expelling the Muslims which left the neighbourhood partially abandoned.

The Albayzín’s physiognomy was to suffer major changes from that moment onwards, as Christians occupied the Morisco houses and re-structured the streets and urban layout to accommodate the larger properties that are now so characteristic of the neighbourhood: cármenes (houses with vegetable gardens, usually terraced) and mansion town-houses

"Granada has stolen my heart, I feel as though wounded, or in convalescence..." These were the words of Juan Ramón Jiménez in a heartfelt, poetic...read more →