Between the provinces of Málaga and Cádiz, set in dreamy landscapes of interwoven peaks and valleys, you will find the “Pueblos Blancos” (White Villages) of the Ronda and Grazalema Mountains. These villages constitute gems of popular Andalusian architecture, lodged between the deep green of their valleys and the rocky grey of the mountains. Discover a region and  people forged over the ages in these idyllic, hidden spots.

This gentle bike route will lead us mainly on quiet country roads to the heart of the region, dropping down from the lofty heights of the Ronda Mountains to  Arcos de la Frontera .

We set out from the ancient city of Ronda (one-time home to writers like Cervantes or the Czech poet Rainer María Rilke) with its gorge, mountains, and famous bullring (Spain’s oldest). From here we will discover many of the “Pueblos Blancos”: Arriate, Setenil de las Bodegas, Torre Alhaquime, Olvera. From there we take the old “Vía Verde” (disused mountain railway – now reconditioned as a Greenway for cycling) to Puerto Serrano. We continue to Arcos de la Frontera, a whitewashed farmstead set into an impenetrable peak above the Guadalete River, a splendid viewpoint over the Jerez countryside. You finish here in Arcos after breakfast, from Arcos you can get the bus to Jerez de la Frontera and on to Seville, or you can head back to Ronda. If you like you can add another bike stage to the town of Jerez de la Frontera, where you can learn how they make the famous sherry wine or see how Andalusian horses can learn to dance! 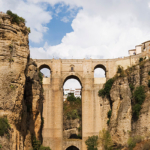 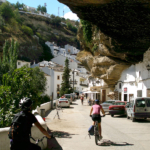 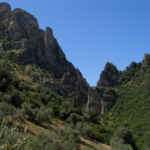 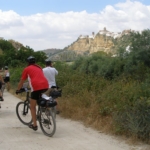 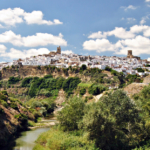 After breakfast finishes this bike tour. You can get back to Ronda or continue to Jerez and Seville by bus.