Route of the Almoravids I

If you want to make an unforgettable journey, in touch with nature and local culture; if you want to travel in time and space, getting to know a large part of Andalusia in all its diversity; if you like cycling and contact with local people, then you simply must ride this bike tour through Andalusia along the Route of the Almoravids!

The first part of Route of the Almoravids, from Granada to Ronda is to be done in 5 stages. If you would like to ride more days, you can continue with the second part, the bike tour from Ronda to Arcos (8 stages), or even on to El Puerto de Santa María at the Atlantic Sea (1o stages)!

Bike from Granada to Ronda

On this bike tour through Andalusia along the first part of the Route of the Almoravids  you will get to grips with the roots of the ancient kingdom of Granada. Setting out from this city, we head southwest crossing the Almijara and Antequera Mountains, passing the beautiful El Chorro gorge and climbing to the mountain pass of the Wind (Puerto del Viento, 1190 m) to finish in romantic Ronda. These are just some of the places, peoples and pleasures that come together to form the backdrop for an unforgettable experience.

The inlands of Andalusia

The bike route of the Almoravids through the inlands of Andalusia, its unspoilt and varied landscapes and its historic towns and cities – Ronda, Antequera, Alhama, Granada- form the heritage that you will share with the ‘romantic’ travellers of the 19th century who came from overseas to discover the sensuality and mysticism of Spain. 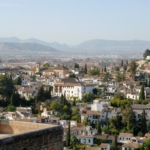 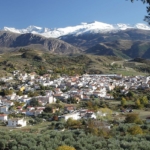 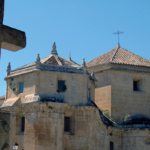 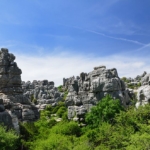 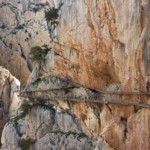 We go from the ancient city of Antequera, through the Abdalajis Valley, caught between mountains ranges and the Torcal Peak, towards the village of El Chorro, well known for its gorgeous reservoir and magical enclave for climbers. Also famous for the path Caminito del Rey, once known as world’s most dangerous walkway, nowadays a safe but still impressive path  that stretches between two gorges, canyons and a large valley. If you want to do this spectacular hike in the afternoon, remember to indicate this at the time of reservation. 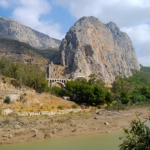 Today the biking will be a bit more challenging, although you will ride only on tarmac road. You start with a beautiful ride through a strange, lunar landscape to the villages of Ardales and El Burgo. Then you have to climb to the Puerto de los Vientos (Mountain pass of the Winds, 1190m), crossing the beautiful Sierra de las Nieves Nature Reserve. A long descent will bring you finally to the lively town of Ronda, where you will stay in a charming hotel. 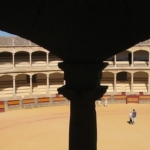