The Cabo de Gata Nature Reserve has besides wild cliffs with spectacular views, natural and paradisiacal beaches like the famous Genoveses or Mónsul, and other small coves only reachable by foot. Wherever we look, within the Nature park, there are traces of volcanic activity, erosion and sedimentation. Volcanism has in Cabo de Gata its most important manifestation in Spain.

You will hike through a vulcanic landscape of great geological variety, with castings lava domes and fossil beaches, between agaves and cactus, typical of a semiarid climate unique in Europe. Despite the semi-arid conditions, the soil of Cabo de Gata hosts a rich flora that has adapted to the rain-starved environment. Some of the approximately 1,000 species of vascular plants are endemic to the park and Europe’s only native palm, the dwarf fan palm (Chamaerops humilis) thrives here. The climate is perfect for hiking even in winter time with an average temperature of about 19 °C and an average annual rainfall of only 156 mm!

The villages you will hike through are special too! While hiking around Rodalquilar, an old mining town, you will pass some old gold mines! And what about the small typical fishing village Isleta de Moro? The small boats near the beach, the white houses of modest fishermen and the extraordinary peace during most parts of the year…an excellent place to try fried or grilled fresh fish!

Come hiking here, disconnect and enjoy the great views of the cliffs and over the crystal-clear water. 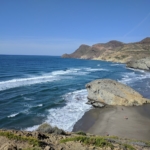 San José can be reached by car, by bus from Almería (1 hour) or by taxi (70 €). It is a fishing port, which grows in summer with tourists because of the incredible beaches. Apart from summer and weekends it is a quiet village. Night in San José. 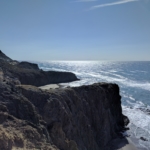 You can do a circular hike from San José passing some of the most amazing and picturesque beaches in the natural park, such as the beach of Monsul, with the petrified tongue of lava, famous for a scene of the movie Indiana Jones and the last Crusade of Steven Spielberg. Another beautiful beach is “Playa de los Genoveses” and there are many other smaller coves which you can only access by foot! Night in San José. 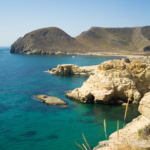 A long but impressive walk along the coast on the cliffs and rocks with beautiful views. You will even walk along a fossil dune and an oasis of palm trees. Following the GR 92 long distance walk you will first have to climb to come to the Tower of Higuera. From here on it is virtually all downhill until Los Escullos, where you can admire the battery of San Felipe, built in the 18th century by order of Carlos III and part of the defensive battery spread throughout the coast with the aim of avoiding pirate attacks. Then continue hiking to the small fishing village Isleta de Moro, one of the best conserved villages of the coast, and good for a break. From there along an oasis into the valley of Rodalquilar, an immense caldera to the beautiful charming village of Rodalquilar. 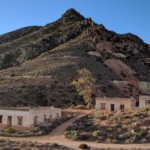 Between the provinces of Málaga and Cádiz, set in dreamy landscapes of interwoven peaks and valleys, you will find the "Pueblos Blancos" (White Villages) of the Ronda and Grazalema Mountains. These villages constitute gems of popular Andalusian architecture, lodged between the deep green of their valleys and the rocky grey of the mountains. Discover a region and  people forged over the ages in these idyllic, hidden spots. This gentle bike route will lead us mainly on quiet country roads to the heart of the region, dropping down from the lofty heights of the Ronda Mountains to  Arcos de la Frontera . We set out from the ancient city of Ronda (one-time home to writers like Cervantes or the Czech poet Rainer María Rilke) with its gorge, mountains, and famous bullring (Spain's oldest). From here we will discover many of the "Pueblos Blancos": Arriate, Setenil de las Bodegas, Torre Alhaquime, Olvera. From there we take the old "Vía Verde" (disused mountain railway - now reconditioned as a Greenway for cycling) to Puerto Serrano. We continue to Arcos de la Frontera, a whitewashed farmstead set into an impenetrable peak above the Guadalete River, a splendid viewpoint over the Jerez countryside. You finish here in Arcos after breakfast, from Arcos you can get the bus to Jerez de la Frontera and on to Seville, or you can head back to Ronda. If you like you can add another bike stage to the town of Jerez de la Frontera, where you can learn how they make the famous sherry wine or see how Andalusian horses can learn to dance! 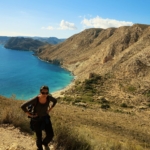 You leave the hotel towards the fantastic fine sand beach Playazo, where you can find the battery San Ramón (XVIIIth century), and from there you follow the beautiful coastline first to the fishing village las Negras, good place to take a coffee and buy some things for a picknick. As for the rest of the walk you will not find anything, except of beautiful small coves along the rough coast and a hippy colony living in an oasis. Finally, you arrive to the next village of Agua Amarga, where you will sleep 2 nights. 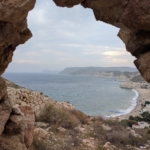 Mesa means table in Spanish, appropriate for this flat-topped mountain which lies along the coastline just south of Carboneras. The horizontal peak is home to the 18th century watchtower of Torre Vigia de Mesa Roldan and a lighthouse. The Mesa Roldan signposted walking trail provides access to the top of the plateau from where there are superb view of the cliffs, the fishing village of Agua Amarga, and the coves of Cala de Enmedio and Cala del Plomo. In October 2015 Mesa Roldan was the filming location for a scene in the internationally popular American fantasy drama Game of Thrones. 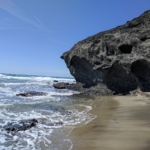 After breakfast finishes this hiking tour, you can get a bus or taxi back to San José or to Almería (taxi 60 km, about 50 minutes, 85 €). Of course you can also extend your stay, and enjoy the beautiful beaches of Cabo de Gata. Or take an extra night in the city of Almeria, nowadays a modern Spanish city, where you can enjoy the mild climate, the tapas and the view of the sea.