Route of the Caliphate

Traveling from Córdoba to Granada is an experience that brings together two of the most emblematic cities of ancient al-Andalus: Córdoba, home to the ruling Caliphs, philosophers, astronomers, mathematicians and doctors who illuminated the Middle Ages with knowledge, centuries ahead of the European Renaissance. And on the other hand Granada, whose mighty kingdom cultivated the sciences above all and where formal refinement and architectural decoration reached levels unmatched in any society of its time. Travel to see these two cities, on a journey that combines culture, nature and anthropology, delighting the senses at every step.

Otros Caminos in co-operation with the prestigious Foundation Legado Andalusí has developed  the Mayor European Cultural Itinerary “The Route of the Caliphate” as a historical and cultural cycling experience, connecting the cities of Córdoba and Granada with their world cultural heritages: the stunning “Mezquita” in Córdoba and the marvelous “Alhambra” in Granada. A cycling adventure through Andalusia’s past and culture, a journey of discovery that evokes the natural beauty and cultural heritage of the Route of the Caliphate.

The bike ride from Córdoba to Granada

Your journey starts in Córdoba, the first city in the world to have four UNESCO World Heritage Sites, surpassing Rome and Paris! You then travel to Luque, where you will be handed over the bicycle with a briefing to start finally your bike ride. The ride leads through wide variety of terrains, passing through a host of villages. Betake a journey through time and across unique landscapes and natural reserves that feature along the way. Ride through landscapes with tranquil hills of olive groves, holm-oak woods, vegetable gardens and vineyards, rushing streams, imposing watchtowers, proud castles, impeccable farmhouses and humble farmsteads, all giving the backdrop to an unforgettable visit.

Enjoy the villages, castles, churches and towns that stretch before you just waiting to be discovered, such as Baena, Luque, Priego, Zuheros, Alcaudete, Castillo de Locubín, Alcalá la Real, Tózar, Moclín, that now give their name to some of the world’s finest olive oils. You will find them the perfect place to relax and recover lost energy with the best food and wines this region has to offer. 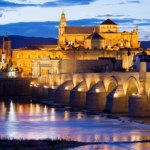 Cordoba is only 1 hour by train away from Malaga and less than 2 hours from Madrid. Arrive in good time so as to visit the famous "Mezquita" (Grand Mosque). Later, a walk on the  Roman bridge and through the old Jewish quarter to see its beautiful patios and have tapas in its inns. Finally, we suggest experiencing an authentic flamenco show to get you ready for a journey which has only just begun. 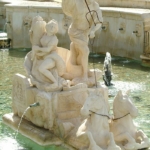 From Cordova you go to Luque by bus. At the former railway station you get your bikes and you cycle on quiet county roads to Fuente Aljama. Riding through mountains, you pass the villages of Zagrilla Alta and Zagrilla Baja to arrive in Priego where you will sleep in the old historical centre. 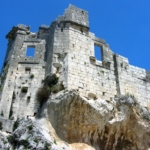 From Priego you are making for Carcabuey on an old disused road. Heading along a little country road past the village of Algar, you then climb to the Gaena mountain pass. From there you enjoy a long and pronounced descent to the splendid town of Cabra. Cycling relaxed on the "Vía Verde" (old reconditioned railway line), in gentle ascent you will arrive to the charming 4 star hotel, which is actually a former olive farm, a few kilometers before the romantic village of Zuheros. 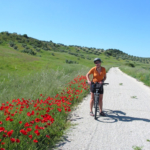 Today you bid farewell to the Subbetica mountains, to immerse yourselves in the countryside of Jaén, riding along the comfortable "Vía Verde" (old railway line). After passing the station in Alcaudete, you continue uphill, and the more bumpy trails and imposing watchtowers above remind you that you are entering Nasrid territory. All of a sudden you encounter the majestic "La Mota" fortress defending the town of Alcalá. As this day is a long stage with lots of uphill (up to 700 meters), we offer the possibility to go with the luggage transfer halfway, you will then only cycle 30 km to Alcaudete. 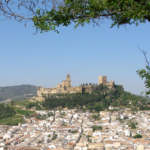 After visiting the La Mota fortress, with its thick castle walls, imposing towers and the old cathedral built by the reconquering Christians within its confines, you head out of Alcalá la Real over its fertile plain, (and adjacent villages of Fuente del Rey and Santa Ana), riding between fields of cereal crops which are full of poppies in springtime. Once passed Casillas de Mures, the landscape changes and you head towards Tózar, just before the final bastion of the Nazrid kingdom. This village awaits you in the distance beneath the watchful eye of its 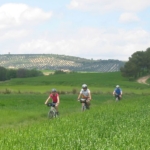 After climbing to Moclín you will enjoy the great views of the Sierra Nevada during the large descent to Olivares. Soon the beautiful plain comes into sight, its arrival announced by the last watchtower you will see, opposite the "tres Juanes" hermitage. Sierra Nevada forms an impressive backdrop. You now approach Granada, and have the option of entering the city from the North, taking a longer route through the foothills of the Alfaguara mountains or entering Granada more easily by its fertile Vega and river Genil. At night you can enjoy a walk through the Moorish neighbourhood Albayzin, visit the Palaces of the Alhambra by night (not possible every day, has to be booked far in advance), or simply enjoy the tapas you are invited to with each drink! 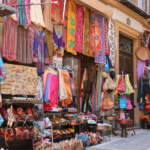 After breakfast the journey comes to an end in Granada. Maybe you still have some time to stroll through the Alcaicería, full of little Arab shops and souvenirs before returning home. Or book an extra night, as there is so much to see and do in this charming town!